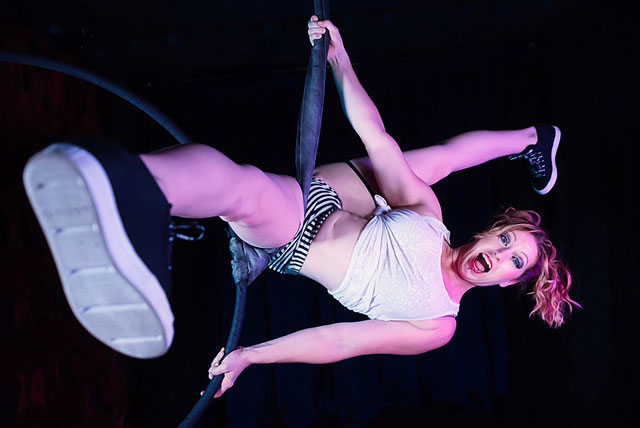 Rebecca Starr got her start in gymnastics at the age of 3 and has been moving ever since! After years of competing she found her true love, performance and the Circus Arts. In the early 2000s Rebecca studied dance and movement at San Diego State University, while performing with the Fern Street Circus and Cirque de la Mer. Rebecca is the co-founder of Lyralicious, a duo specializing in Aerial Hoop. She performed worldwide as part of Lyralicious for many years. She has been featured on MTV’s MADE, NY Ink, and CBS This Morning; and performed with Cirque Dreams, “The Girlie Show”, L.A Circus, Quixotic Fusion, Frequent Flyers Aerial Dance Festival, San Diego Symphony, Middlebury Opera Company, and countless more special events, corporate productions, and galas. Rebecca was an integral part of the emerging world of Pole Fitness in the early 2010s; she competed, performed and judged internationally for several years. Pre-Covid, Rebecca traveled as a master instructor, doing tours and residencies at circus schools and studios across the globe. From 2016 she coached and choreographed for the Circus Smirkus Big Top Tour, and from 2020-2022 was the Head of Aerial Arts at Circadium School of Contemporary Circus in Philadelphia, where she also taught Pole, Contortion, and Acrobatics.